Last Friday Holy Family travelled to Loughmacrory to take part in the girls’ Gaelic tournament. Our girls played against teams from Newtownstewart, Cabragh, Loughmacrory (B team) and Fintona and secured a place in the semi-final after winning all their matches. The girls then met Loughmacrory’s A team in the semi and after beating them it was on to the final against last year’s winners – Cabragh!! This was a tough competition from the start, but after a number of nail-biting moments we were delighted when Holy Family was crowned this year’s winners. Well done girls on your magnificent win and don’t forget to keep at the training as we still have the St. Enda’s tournament ahead! 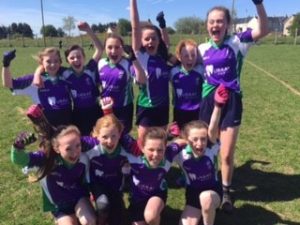